Block management case study – how are we helping East Sussex freeholders and leaseholders? 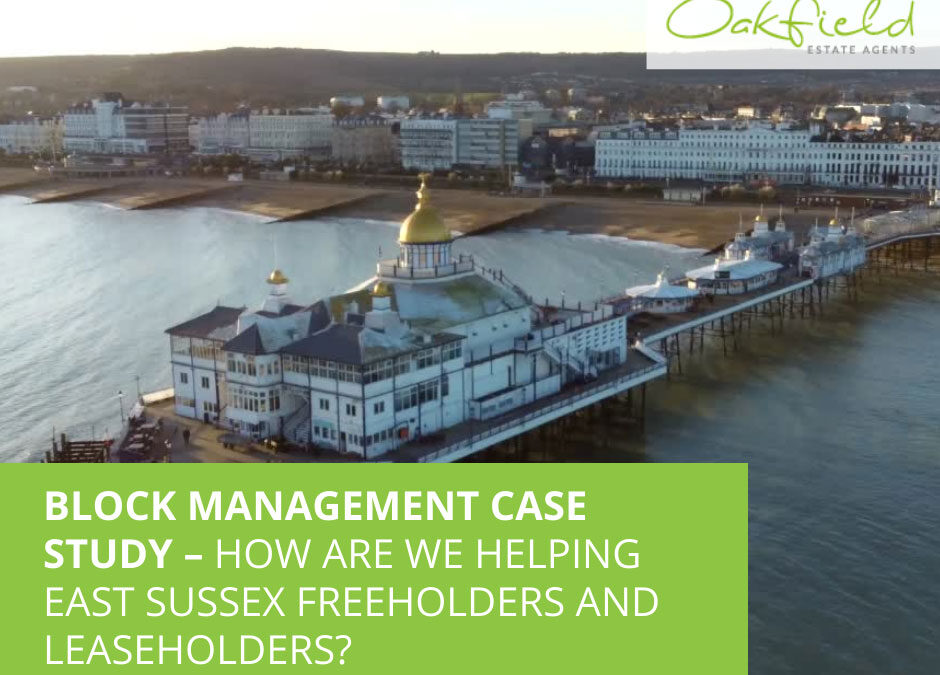 Whether you are the freeholder of a building or a leaseholder (who may have a share of the freehold), it’s important that you work with the best block management agency in your area.

Managing blocks of purpose-built properties is a complex process which has become more time-consuming and difficult to navigate in recent years.

The Grenfell Tower tragedy of 2017 increased attention on purpose-built buildings and the fire safety measures they have in place.

As well as the safety implications for residents, issues have been raised affecting the sale of leasehold flats in blocks.

What’s more, at some point in the future the government intends to introduce a new Fire Safety Bill which could require block owners to make a range of improvements to their buildings in order to remain compliant.

That’s why it’s so crucial to have a competent and dedicated block management agency in your corner to help you keep residents safe and keep costs down.

Below we outline a case study of a block we manage and the work we have put in to reduce problems for its freeholder, leaseholders and tenants.

Here at Oakfield Estate Agents, since 2012 we have managed a large building in Bexhill-On-Sea which contains 66 flats and a large commercial unit at the bottom.

Following the events at Grenfell Tower in 2017, it became clear that Aluminium Composite Material (ACM) cladding on buildings was not safe and needed to be replaced.

At the same time, the government highlighted other types of cladding which are considered to be dangerous. As a result, many mortgage lenders became reluctant to lend on buildings which fell into a certain criteria.

To assist with the sale of leasehold flats in buildings such as the one we manage in Bexhill, EWS1 forms were introduced. These forms are signed by a surveyor and stipulate whether a building is safe or not.

Surveyors are unlikely to sign an EWS1 form unless an intrusive wall survey has been carried out, so we organised for this to be conducted.

The survey we carried out revealed that the building contained Expanded Polystyrene Insulation (EPS), which falls into the category of highly combustible material and therefore dangerous cladding.

The next stage was to commission a fire engineer to review the survey and provide a report to set out what action would need to be taken.

At this point, it became clear that the building would need remediation and cladding replacement – costs which would naturally fall on the leaseholders.

However, we identified that the building had a build warranty which allowed the leaseholders to instigate a claim for the costs of the remediation work.

The other alternative – which we have exercised – is to apply for a portion of the government’s £3.5 billion Building Safety Fund.

Both of these processes can take a long time, but the idea is that eventually the costs of the remediation work will either be covered by the building’s original warranty or the government fund.

In the meantime, with the building set to have to wait a significant amount of time for improvement works to be carried out, it was required to implement a Waking Watch service – a 24/7 presence to detect and raise alarm in the event of a fire at a cost of over £6,000 per week.

The government has introduced a Waking Watch Relief Fund which allows buildings to claim for the cost of fire alarm systems to be installed to replace the need for a Waking Watch service.

After applying for this funding on behalf of the building, we received approval for the full costs of a fire alarm system to be installed in the building at a cost of £110,000.

This means there is no longer a need for a Waking Watch service, saving the leaseholders thousands of pounds over the long-term.

However, even with a fire alarm system, evacuation management of the building is still required. The building still needs to be regularly patrolled, with defects and hazards noted and residents assessed for their ability to self-evacuate.

The building could have outsourced this management to a third-party company which would have been another significant cost for the leaseholders to bear.

Fortunately, the building has a recognised tenants’ association which has rallied residents to take over the evacuation management, keeping costs down for all stakeholders.

Here at Oakfield Estate Agents, we are really pleased that we have been able to help the freeholder and leaseholders to improve the fire safety of the building and reduce costs significantly for residents.

The building is unlikely to have remedial work completed for another one to two years, so a Waking Watch service during this period would have cost hundreds of thousands of pounds.

The next hurdle is to arrange the improvement work and get the required funding approved. We have applied to the government for pre-tender support, with the aim of securing an upfront portion of the funding to pay for the cost associated with tendering the remedial work.

Once the building work is finally carried out, the building will be even safer, while it will be possible for leaseholders to sell and the building insurance costs will return to a more reasonable level.

As you can see from the above case study, having the support of an agency which is experienced in block management can help to improve the safety of large buildings, keep costs down for residents, while also applying for relevant government funding and progressing plans for improvement work.

If you want further guidance on how we can help you to manage any issues associated with block management, please get in touch with our expert team today and we’d be delighted to help you.