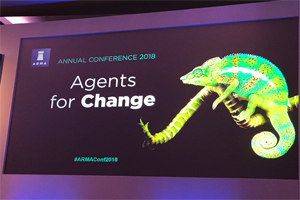 Richard Snatt and Carol Sowter from Oakfield’s Block Management team attended the Annual ARMA Conference in Central London on Thursday 18th October representing Oakfield at the event. The Park Plaza Westminster Bridge Hotel put on a fantastic event along with ARMA which made for a thoroughly enjoyable and informative day for all. The hotel itself was particularly luxurious, a very fitting environment for the event being staged.

There were several speakers throughout the day including an incredibly engaging presentation relating to the emergence of 5G and the impact of Prop Tech on the Property Sector, and the potential in the future for fully ‘smart’ buildings. There were informative discussions about the current developments in Parliament about Leasehold reform, and numerous presentations on the possibility that the Property sector could become fully regulated in years to come.

There were frequent refreshment breaks, and both Richard and Carol are still talking about the dessert that they may have both enjoyed second helpings of! The sponsors of the event had stands to set out to enable them to discuss the products and services that they had on offer, and they all had a selection of goodies for all to help themselves to in order to make them memorable moving forwards, the networking element of the event was particularly interesting as several stands seemed to be offering the same product/service, and the companies only had a very short amount of time to try to make an impression.

Overall it was an excellent day and both Richard and Carol benefitted from attending a very interesting event.